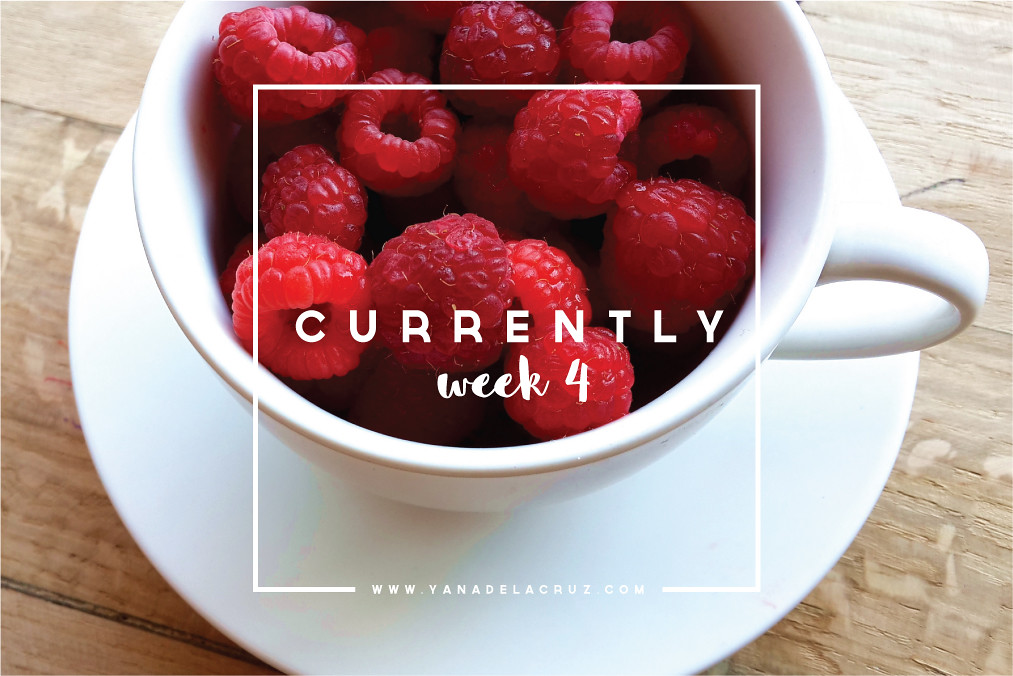 I know, I’m such a bad blogger. I’ve been neglecting my blog again since my last post was last November pa. Usually, the last quarter of the year is the most stressful and busiest time in Advertising.

Since it’s the new year, I want to get back on track. Just bouncing back to bring back my blogging mojo.

LISTENING: Love Yourself by Justin Bieber

It’s been weeks since I’ve been struck by the Bieber fever and I tell you … it won’t fade anytime soon. I think my officemates could testify to this whenever our playlist is on in the office. Just the other day, we listened to different covers of the song and even found an explicit version which was super funny.

Ok, ok. I’ve been craving for this since my last Currently post which was written mid-November pa and until now my craving hasn’t been satisfied yet. I would give anything for a bowl of ramen right now.

A week before my birthday until last week, I was really depressed. Yes, I’m not afraid to tell you guys about this.

First off, we didn’t celebrate the new year like we used to because my brother was sick plus I terribly missed my Dad.

My kuya was confined last January 1 because of Dengue. It’s not just the “ordinary” dengue, but it was the severe one which was DHF (Dengue Hemorraghic Fever).  Everyone at home was devastated. It was not a good thing to start the new year. We’re all praying for him because every day his platelet count was dropping and blood (plasma) transfusion had to be done. Good thing that his condition improved after 4 days in the hospital.

I couldn’t stand being in hospitals because it’s depressing seeing all the sick people around. I watched over my kuya for just a few hours because my sister-in-law went home to rest and believe me, I almost cried because he’s in pain and I couldn’t do much. I remained strong for my brother, sister-in-law, nephews and most especially my Mom.

Another thing that added to my depression is that it was only a few days before my birthday and I told myself that I don’t have any right to celebrate it because it was just not right. I could remember wishing for my brother to get well for my birthday and it came to a point where I questioned everything on why all of this was happening.

We’re all thankful that my brother was discharged 2 days before my birthday and he’s fully recovered now.

I’m happy because things took a turn for the better during my birthday salubong with my officemates and my birthday dinner with my high school barkada. All the sadness went away when my officemates and I sang our hearts out. It was a night of pure madness! I also got a surprise cake from them which was awesome.

After a night out with my officemates, I went grocery shopping alone (which I find very therapeutic) and prepared dinner with my mom. I’m so glad that I get to spend time with my mom even though we’re busy chopping onions and cooking all over the place. I personally love cooking with my mom because I learn so much from her. All the hard work paid off because every dish we cooked was a hit!

After dinner, I laughed through the night with my high school barkada. It was the best way to end my birthday! I’d also like to thank you guys for the gifts. I rarely get anything from birthday kaya I was really happy.

Now, I’m feeling better. I’m thankful because I managed to pull through my depression. People get really surprised whenever I’m sad or in a bad mood because I’m always loud and cheerful.

One day at a time, Yana. Kaya mo yan!

To be honest, I only watch anime or a TV series that could really strike my fancy and believe me, I don’t get interested that easily.

Last November, I could distinctly remember browsing through my Facebook feed full of One Punch Man updates and memes. I immediately searched about it, watched one episode, and the rest was history. I’m on the edge of my seat whenever I watch it because it’s that good. Plus, the series really makes me laugh because the main character, Saitama, is super funny and kengkoy!

Even though season 1 ended last month, I still re-watch the series whenever I have free time. I suggest you watch it too! Promise, sobrang worth it.

Season 2, where art thou?

Summer is just a few months away and I’m already gearing up for it!

I already have the giant pink donut floatie which my friend ordered in the US and brought it here in the Philippines when she went on a vacation last year. I haven’t even used it yet but I’m already planning to buy another one. Well, it’s a different design naman plus it’s a UNICORN! Who could resist a unicorn?!

When I bought Christmas gifts last month, I took advantage of The Body Shop’s Buy 2, Get 1 free promo. I shared one set with my mom where she tried the Olive Shower Gel and I got the Honeymania™ one.

I don’t really like using shower gels. I think it’s because of a bad experience when I was in Highschool.

My faith was restored when I tried The Body Shop’s Honeymania™! I fell in love with it and have been using it since then. What I love about it is that it has a subtle floral scent that lingers for a long time. It’s also soap-free and it washes off easily (Unlike other shower gels that gives you an icky, slippery feeling).

Now, I want to try the Body Scrub and Perfume from the same line!

My office “BFF” went to Hong Kong last month and after seeing his photos, I immediately missed the city. Plus, Hong Kong photos, blog entries, and Snapchat stories have been haunting me since 2016 started.

I was supposed to go back next month to celebrate the Chinese New Year with my college blockmates but I had to cancel because #reality happened. I won’t go into detail about it but let’s just say I had to sacrifice the trip for the greater good.

I miss everything from the skyline, the food, SHOPPING, and the happiest place on earth … Disneyland!

Could someone please take me back?

As you all (or not) know, I turned 24 last January 9. Parang kailan lang na I celebrated my 18th birthday and now I’m a year away from quarter-life. Until now, I still haven’t figured out what I want to achieve before I turn 30 and I don’t even fully know myself. See, I’m that lost but still not giving up.

I’m claiming 2016 as MY year! It didn’t start as awesomely as expected but I know that things will turn around eventually. This year, I vowed to get things straight and done because I personally don’t want to experience the dreaded “quarter-life crisis” that most people go through. Ika-nga, 2016 is either my #BeBrave or go home year. And speaking of #BeBrave, I’ll be posting another entry about this soon which I’ve been writing since last year. Woot, woot!